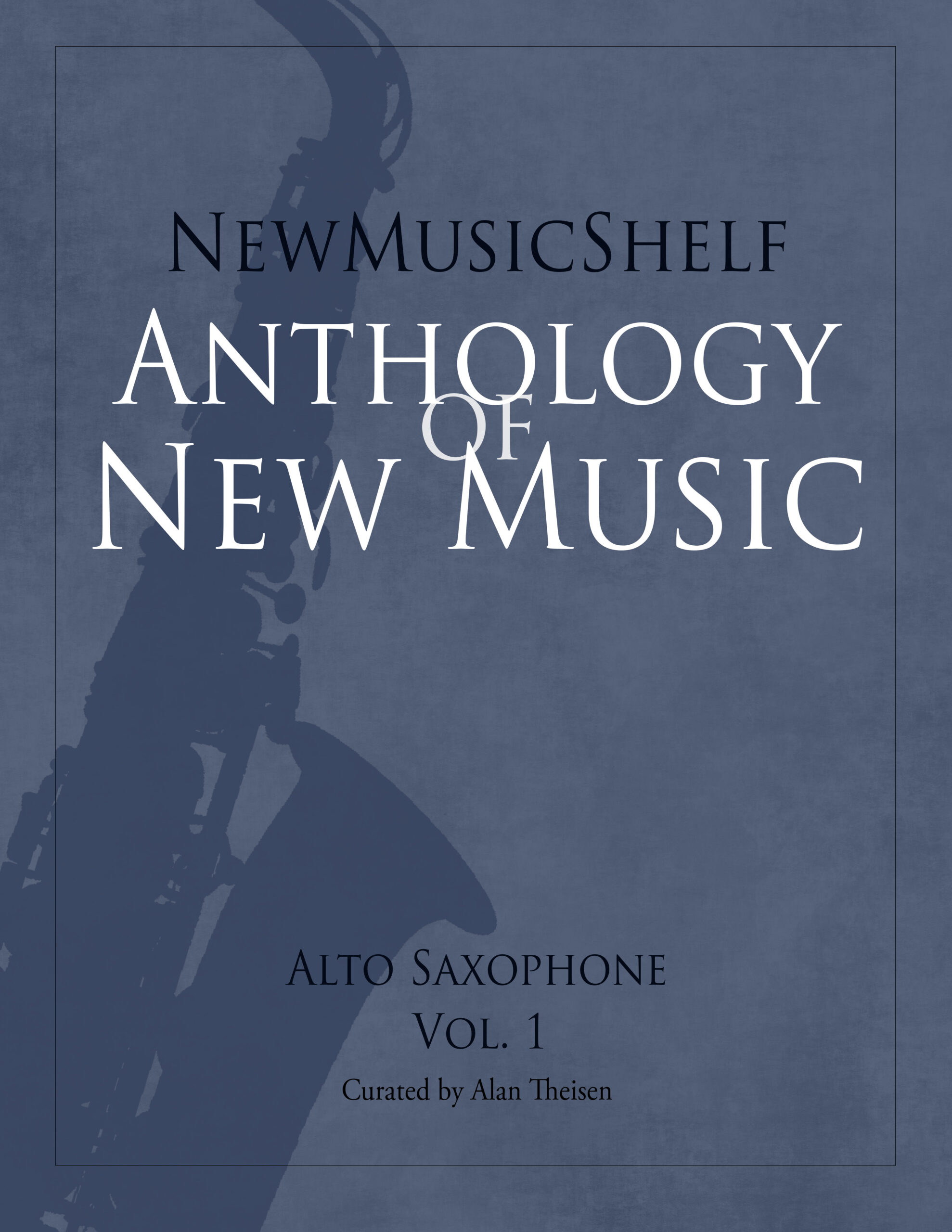 Lines To Be Put Into Latin

The lightest touch
if it is gently giv-

en can yield as much
affection as a deep

embrace, soft as a
glance, swift as a

drop of rain, light
as a leaf, I give

My Three Scherzi for Solo Oboe, Op. 26 are written for and dedicated to Los Angeles oboist Rong-Huey Liu and arranged for Solo Alto Saxophone for Michael Mortarotti and Clarinet for Andrew Leonard. These short yet demanding pieces require a keen sense of control and masterful musicianship for this fastidious instrument. The first movement, marked Allegro Animato, opens with a playful theme in F Major before it takes a few chromatic twists and turns and descends to a point of stability. It quickly builds back up for a dramatic return of the theme followed by a swift transition into a sprightly middle section. After a chromatic ascent and decent build upon the early thematic rhythms, a definitive return to the opening material is heard and a quirky conclusion is ushered in. The second movement, Adagio Expressivo, is a sensual outpouring of longing. The melancholic theme, with hints of hope, endlessly grows and develops at both its highest and lowest points. A smooth transition back into the introductory material heralds an evolved variation of the theme and concludes with a whimsical F-Sharp Major scalar passage before reaching home. The third movement, Freely;Vivo Scherzando, is a perpetuum mobile of sorts. It opens with a plaintive theme that is quickly transformed into the aggressive and rhythmically unstable scherzando. The regularly shifting time signature and recurring accented interval of a minor third become the driving force of this short etude-like scherzo. After reaching a peak of frenzy, the music winds down and returns to a slightly varied form of the free, opening theme. Just when one feels at rest, a heightened sense of instability and virtuosity are demanded before reaching the final, calming folk-like calls before a sudden final vivo appears to bring the cycle to a dramatic close.

Having been inspired by the calls to prayer in predominantly Muslim cities or cities with public Muslim prayer calls (like northern Nicosia, Akko, and Istanbul), I found myself recording these calls with my cell phone voice recorder, and listening to the files from time to time. When the singer is talented, the call is immediately transcendental – it interrupts your state of mind and transports you to another place. Perhaps a reverent, spiritual place? A place of calm? Reflection? Meditation? The calls themselves are riddled by silences that demand your attention. It is a silence that simultaneously has tension and does not have tension. It is truly fascinating.

dhakira : a middle eastern reflection is an homage to this Muslim tradition. It is an attempt to create a saxophone version of these calls, while including “every day” sounds within. The word dhakria means memory in Arabic. This piece was written for #RESISTANCE #RESILIENCE, a project by Castle of our Skins, and it is dedicated to its premieresse, Seychelle Dunn-Corbin.

This work should be performed with your utmost freedom, and a sense of spiritual abandon, within the realm of meditative devotion. Wild rubato is encouraged, and exaggeration is welcome.

Chasing Shadows is inspired by the various timbres in different registers of an alto saxophone. The piece creates a dialogue between two voices. One has the leading role and the other chases after it; however, from time to time the roles switch between voices and it becomes ambiguous and harder to distinction between the main “entity” and the shadow.

In the fall of 2018, I was looking through boxes of old papers to decide what to keep and what to get rid of. I came across some lyrics that I wrote while I was working sixty hours a week at two jobs, which were at a factory and a retail store. I was in my early twenties at the time, and the lyrics were meant to be used for a song with my old hardcore punk band. However, the band dispersed before they had a chance to be used. I posted them on social media because they still resonate today. Saxophonist, Alan Theisen, expressed to me that he would love if I wrote a solo piece for him with the same title, inspired by the lyrics. And so, I did! Here are the lyrics that inspired the piece:

Fuck Your Factory & Your Attitude was written for Alan Theisen and was composed during the first three weeks of January, 2019

Alan Theisen: "Attack" from Sonata No. 2

Sonata No. 2 for alto saxophone and piano, written fourteen years after my first, was commissioned by and dedicated to Andrew Hutchens. Its four movements (performed without pause) are named after and loosely inspired by the four successive sections of a waveform: Attack, Decay, Sustain, and Release (the so-called ADSR envelope). I enjoyed the idea of a 12-minute sonata being an amplified version of a single sound signal. Through continuous and hyperactive variation, all movements share the same musical material (though this may be difficult to perceive on an initial listening). The principal motivic idea of a tritone followed by a perfect fifth is presented in the opening measures and recurs throughout the sonata in various guises. The emotional content of the composition is rather aggressive, bleak, agitated, bitter, and pessimistic – a narrative not intended by me while composing but rather was revealed toward the end of the creation process. Attempts at peace and beauty are thwarted by savage interruptions. Perhaps this is a subconscious reflection of our troubled times.

Eyelid for solo alto saxophone is a part of ANATOMY, a series of solos for various instruments that are all based on different parts of the human body. Each solo focuses on how characteristics of a body part, however subtle or minute, can hold a story in their details.

“Eyelid” was premiered at Illinois State University in April 2018.

This piece is meant to be performed as intimately as possible- that being said, the soft dynamics and silent space between phrases are very important. (If possible, a dimly lit concert hall with just a stand light for the performer is ideal for performance of this piece to assist with an intimate mood.)

The entire piece should be slurred throughout.

Gagaku (Japanese imperial court music) was imported from China and Korea around the 8th century, which is said that the oldest orchestra all over the world. Voix de l’orgue (Voice of organ) was composed in 2016 with the theme of “Holy”, it was inspired by Gagaku which is used for Shinto religious occasions, imperial event and so on in Japan.

The Sho (Mouth organ, also Sheng in chinese) is in charge of playing chords in Gagaku, it express the light from the heaven. The Sho can produce 15 notes normally, and plays 10 kinds of chords which is called Aitake by these combination. In this piece, I used the original Aitake chords and their transposition in freely. The saxophone plays limited motif and technique of playing, it makes that view of the world which is not closer to artificiality. On the other hand, the piano expresses atmosphere, parspective, nuance of touch and color in sterically.

This sonata was commissioned by saxophonist Scotty Phillips and premiered at the 2016 North American Saxophone Alliance Biennial Conference in Lubbock, Texas. It was composed while in residence at Copland House, Cortlandt Manor, New York, as a recipient of the Copland House Residency Award.

While growing up in Florida, I have many memories related to rain, from dodging downpours at theme parks to enduring the lashing from a tropical storm. Rain is, of course, absolutely vital to our survival, and we are extremely sensitive to any changes in the rain pattern. Extended droughts strain our resources, but the excessive rain that often follows is even more damaging, causing floods, landslides, and sinkholes. This composition captures three facets of the rain cycle.

The first movement is about the restlessness and aggravation of drought. The rhythms are constantly shifting and asymmetrical, with the saxophone frequently angrily jumping between registers. The piano never uses the damper pedal, so the soundscape is devoid of the comfort of sustaining resonance. Occasionally, the rhythm settles down into a steady beat, imitating a Native American rain dance and offering a glimmer of hope as a respite from the restlessness. But in the end, it is the rain dance that frantically and desperately accelerates out of control to close the movement.

Many times, as the dry winter gave way to the wet spring, I remember the refreshing smell that would emanate from the ground as the first raindrops began to fall. This scent is called “petrichor,” and offered relief from the preceding dryness. Every time I smell this today, I feel a bit nostalgic for those days in my youth. Finally allowing the use of the damper pedal, I evoke this nostalgia as well as comforting relief as the drought is now over. The disjointed and panicked cries of the first movement are replaced with lyrical and delicate melodies; the biting dissonance is replaced with diatonic harmonies. The discovery of the damper pedal allows for a glorious swelling of sound that leads to the climax of the movement, but a cadenza by the saxophone returns to the poignancy of the opening bars.

The third movement, deluge, returns to materials from the first movement, leading off with the forceful piano gesture that opened the sonata. Instead of the clarity and desolation of the first movement, there is an almost constant flow of running notes, and the sonic density increases steadily as the movement progresses. The saxophone alludes to a flowing melody from the second movement, but it is inundated with descending arpeggios in the piano. A scherzando section references some of the rhythmic shifting of the first movement, and it leads to another barrage of arpeggios and running notes. The rain dance returns, but this time it is submerged, with the incessant damper pedal rarely letting the music come up to breathe as it gets more and more restless and panicked. Excess is often not the solution to the problem of absence. One final return to the lyrical melody is little relief, as it drowns in a flash flood of tone clusters and glissandos.

Markings are always guidelines. My primary goal is an expressive performance, so you are free to take liberties if necessary.